First portion of her interview with my rough transcription

KRIM: You said that the Journals reporting has been erroneous and is quote grounded in baseless assertions. Could you get specific on the key points today starting with whether you are now at the point where you are only testing for one thing herpes using your propriety technology is that correct?

And our specific recent announcements about what we are doing with our nanotainer tube have to do only with the tube that we use to collect capillary or finger stick blood and the decision that we made to take those tubes through the FDA clearance process, we have submitted all of our filings around those nanotainer tubes. The nanotainer was actually cleared by the FDA for use with our devices and software for the first test that we took through the FDA for HSV and now we are taking it through for use with any combination of tests.

So once you submit those submissions at a certain point if you are going to transition from operating under the CLEA lab framework to the FDA framework to be compliant with the use of those nanotainers as a FDA regulated device you have to move to the FDA quality systems and that is what we have just done.

KRIM: So at this point you are not using the nanotainer for anything except then the HSV Test?

HOLMES: The nanotainers – you said technology initially and Theranos has a lot of other technology which is our devices and software and chemistries that have nothing to do with the decision to transition the tube.

KRIM: So are you testing for other medical conditions using Edison?

KRIM: So if I went to one of the centers and got a finger prick and I only gave that much blood What tests are you currently able to perform for that blood using anything other than commercially available lab equipment?

Right now because we are at a moment in time in which we have decided to transition from the lab framework to the FDA framework, I think about this kind of like you have cars driving on a road and you say I am going to take everyone from driving on the right side of the road to the left side of the road the only way to do that is to pause and cut over.

So as a result, because we have voluntarily decided not to use our nanotainer tubes until we cut over to the let hand side of the road which we now have the FDa quality systems in place we are not collecting the finger stick sample for anything HSV that has nothing to with what we can run on our devices has nothing to do with our tests or our testing methodology or the accuracy or the performance of it

CALL TO ACTION - As of April 15th can make comments to CMS here - this is literally the only way to get this rule changed.. Build the movement later

Patient engagement is such a core value of a high quality, low cost, patient centered health care system that I thought everyone understood it by now but clearly there is work to be done.

Although it is still just a proposal -  CMS is suggesting that they essentially remove any real patient engagement from the already low 5% to a token 1 patient for View, Download or Transmit and an either/or test for Secure Messaging.

Here is the link to the full PDF version , the regular version will be published on April 15th

It might just seem like a wonky proposed rule buried in the Federal Register but patient centered care is a core principle of our health care system and if we really believe that patients are part of their own or their family member's care they need the same access to information as the rest of the care team. This isn't just about "data" it is about treating patients as full members of their care teams.

We also know that this is something that patients want -As far back as 2011 when we were developing MU Stage 2 rules "73% of Americans surveyed would use a secure online communication solution to make it easier to get lab results, request appointments, pay medical bills, and communicate with their doctor's office."

It is also easily achievable IF you combine an active patient engagement strategy versus simply turn on the portal and expect patients to find value in it.  We also know it works from large systems like Kaiser to rural providers (case studies on ONC web site) when doctors lead the way.

Sadly it appears a few very loud doctors and a perhaps a few powerful organizations (looking for the link to the comments behind this change)  pressured CMS to change the rules for stage 2 to essentially drop patients from being key members of the healthcare team.

Once the proposed rule is officially published on April 15th we will be able to make comments but clearly they need to hear from patients. Perhaps we should propose a sliding scale payment? If you have 1% of patients engaged you get 1% of payment all the way up to 100%?

Here are the key sections. 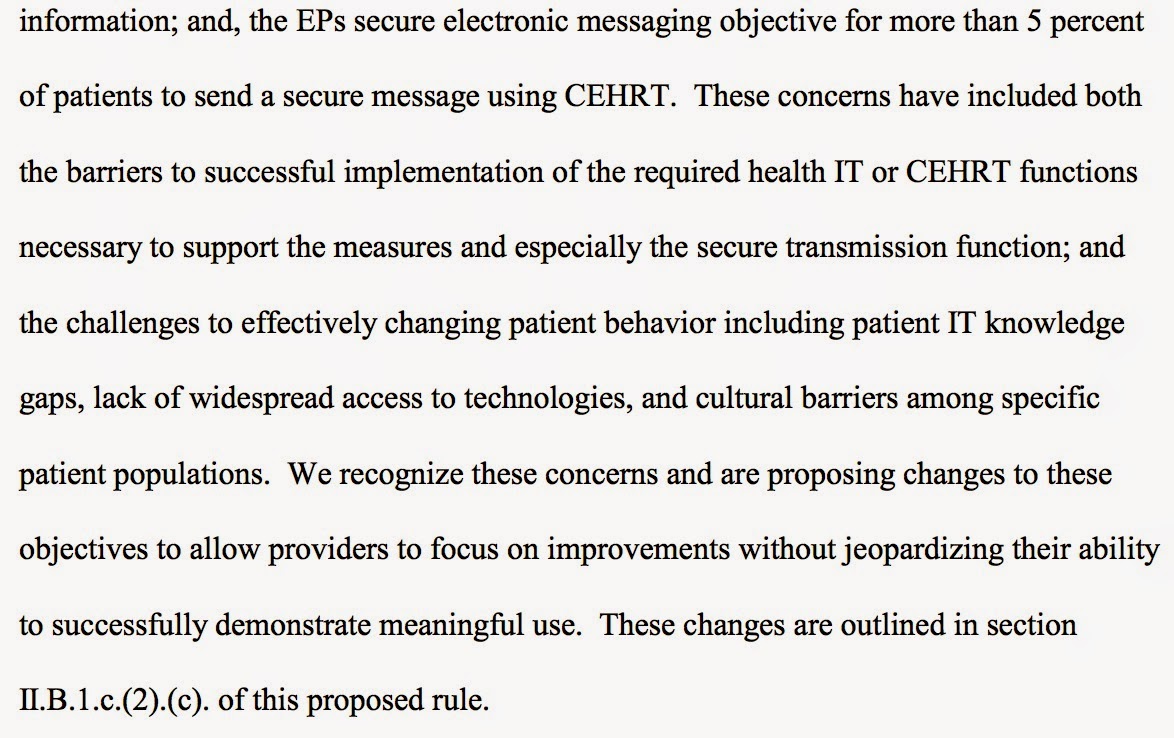 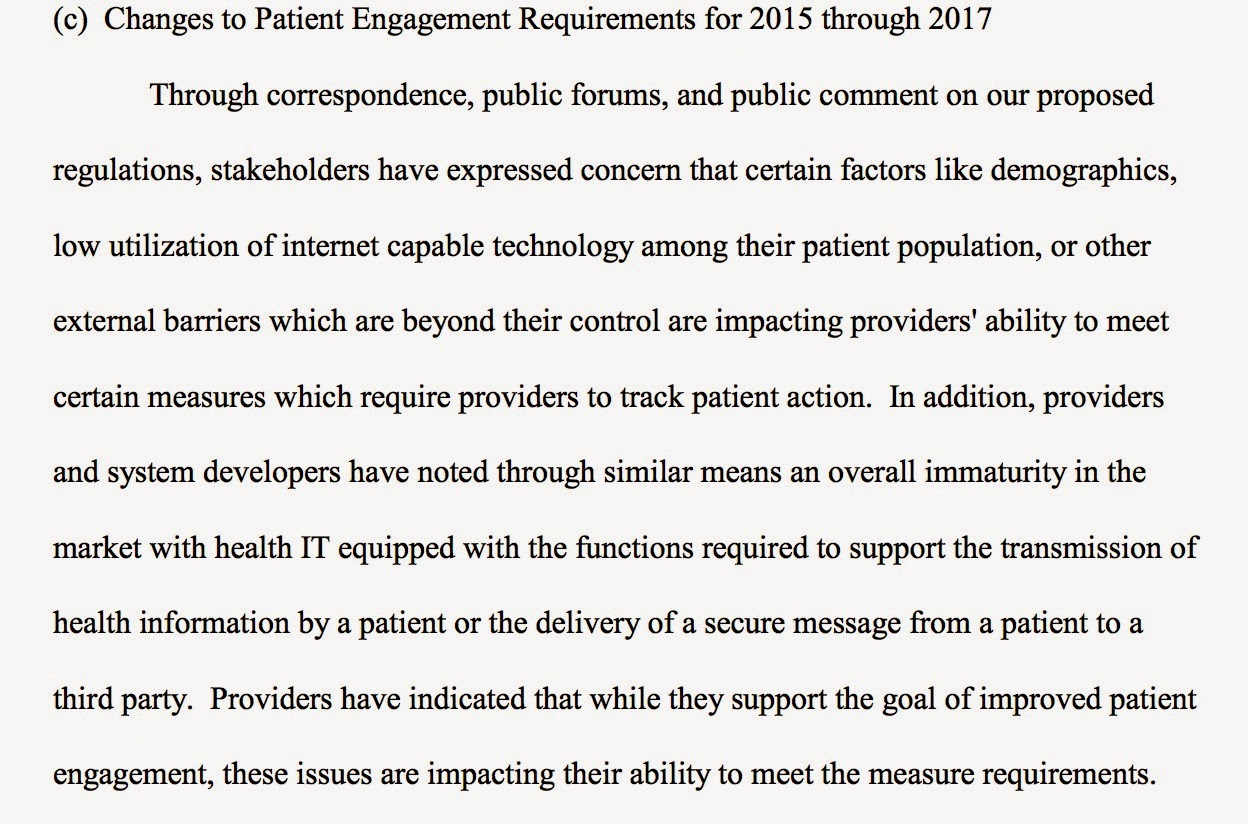 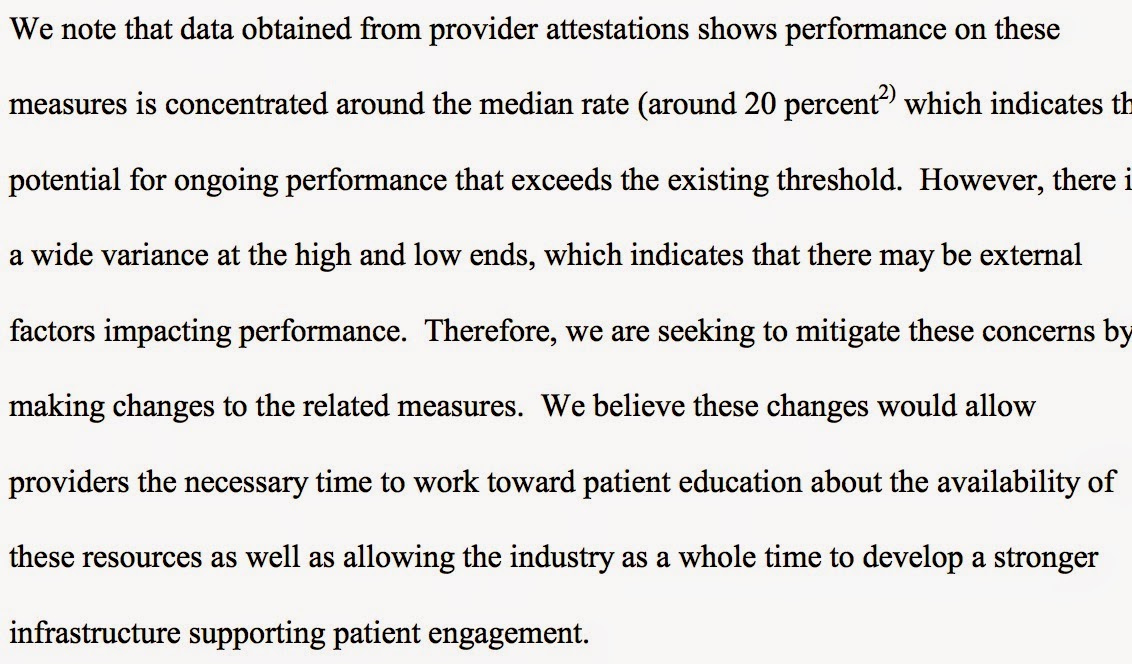 FYI  HISTORY - Almost six years ago I was one of 3 people along with Devon McGraw on the Governance Committee at ONC that stood up the National eHealth Collaborative and we ensured there would be dedicated patient voices on the board. Many of those same people then stood up  the Policy and Standards Committee when HITECH passed and again patient's voices and needs were included in the policy and committees;

Then five years ago I along with the head of ONC at the time - Rob Kolodner and ONC staffers I was hired to create the Office of Consumer Engagement (which was put on hold for 2 years but David Blumenthall was appointed and said - "where in HITECH does it mention patients?" and thought it was a program vs a core value. W e were still able to get patient engagement into meaningful use and I thought we were on our way

The consumer advocate position was finally funded when Farzad became the head of ONC and in Jan 2011 Lygeia Ricciardi finally filled the position with amazing grace and skill. I also went back to help ONC again in 2012 and stood up a National Program for  provider adoption of patient centered Health IT via the REC's (even though they weren't funded to do MU stage 2) and Farzad, Lygia and myself all left left in late 2013/early 2014 thinking we had left it in good hands with a strong MU Stage 3 draft recently published

So this rule change is a HUGE surprise and disappointment and not in alignment with a patient centered health care system where patients are treated as full member of their care teams.

Posted by Unknown at 6:33 AM No comments: